I am not one of those horror fans who constantly sits around and bitches about the state of the horror genre, particularly American horror.  In fact, if I am being brutally honest, I can admit that the remake craze doesn't really bother me as much as it seems to most other die hard horror fans.  Because, when it comes right down to it, I'd rather have a horror film remake in theaters rather than no horror at all.  And it's not like there is not good horror being produced.  It's just that most of the time they are low budget, independent efforts that never make it to theaters, thus requiring fans to search a little harder to view them.  The state of American horror has been debated for quite some time and you will find those who are adamant that the torture porn craze made popular by Saw and Hostel has ruined American horror, while others who are fans of extreme gore are giddy at the trend.  I am somewhere in the middle.  There have been very good American horror films produced in the last decade.  Just this year, Insidious demonstrated that taking horror back to its simple, "less is more" philosophy can still be highly effective and profitable.  Certainly it is criminal that 2006's All The Boys Love Mandy Lane has yet to find an American release because it truly is one of the best horror films of the last decade and shows that slashers can still by highly stylistic and atmospheric.

However, truth be told, some of the best horror films of the last ten or fifteen years are foreign horror films.  Films like High Tension, Inside, and Fronteire(s), Martyrs, and Cold Prey are exceptional foreign films  that have been lucky enough to garner at least some attention in the United States.  However, there are quite a few other foreign horror films from various countries that are lesser-know that deserve to be seen by true horror fans.  And while some will complain about the subtitles that very often come along with these films, I would say, as a horror fan, do not limit yourself to great films because you may have to read a little bit.  More often than not, the dialogue is the least important aspect of these films.  So, for those looking for a good horror film and are tired of remakes and American cliches, I offer these six little foreign gems that are truly must sees for fans of the genre.

Part of the After Dark Horror Fest, this may be familiar, but I still run across many horror fans who have not heard of it.  Told mockumentary style, Lake Mungo focuses on a family who are trying to cope with the drowning of their youngest member, sixteen year Alice, and the strange events that have been occurring since her death.  Through interviews, video footage, and news reels, the story unfolds at a deliberate, methodical pace that will leave the viewer breathless by the end.  Deeply disturbing on many levels, with a layered, complex, and highly intelligent plot.  Word is, there will be an American remake.
5.  Ils (France)

Those who thought The Strangers was scary and suspenseful take note: this film makes it look like a romp on the elementary school playground.  Truly suspenseful, tense, and full of atmosphere, Ils is a terrifying account of a couple being terrorized at their isolated Romanian country home by an unseen, mysterious group of intruders.  Deeply unsettling and truly scary, one definitely to watch with the lights out and the volume on your television turned up if you truly want to be creeped out.

Perhaps one of the most disturbing films I have ever scene, The Untold Story requires a strong stomach and unflinching reserve to make it through.  Based on true events, the story tells of a man who takes a job at a restaurant where he quickly lets his insanity take over and systematically butchers his employers and their family members in highly disturbing ways.  He is caught and put in jail, where he is tortured mercilessly in order to obtain a confession.  Violent beyond belief, the film also has a message and a deeper meaning.  It will certainly stick with you for various reasons long after you eject it from your DVD player. 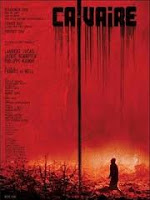 Probably the least known of France's fairly recent string of highly effective horror films, Calvaire is certainly the most unique.  Viewing it is like watching a nightmare and there are scenes that are so unique, yet highly creepy, that it just may have you rewinding to watch again, just to make sure you saw what you think you did.  The plot deals with a musician who is traveling alone to perform a Christmas concert.  Along the way, he crashes his van and is rescued by the seemingly nicest old man in the world.  Well, that facade soon fades and the musician finds himself subjected to some the weirdest, most disturbing psychological torture ever captured on film.  Highly stylized and unique, Calviare is the perfect example of the type of quirky horror film that would not be made in America.

Hell's Ground has balls and is perhaps one of my favorite horror films from the last fifteen years.  It is such a unique, highly ambitious film that it is completely safe to say that you have and will see nothing like it.  A group of Pakistani teenagers on their way to a rock concert get more than they bargained for when they encounter first a group of infected flesh eaters, and then easily the creepiest and most kick-ass killer of the last twenty years; a hulking monster dressed from head to toe in a burka and swinging a spike ball on a chain.  The film will have horror fans grinning with glee at the very successful blend and reference to virtually every popular and successful American horror film ever made.  The film has buckets of atmosphere and the last fifteen minutes will have you glued to the edge of your seat.   Who knew that Pakistan could produce one of the most stylish, effective horror films of the last couple of decades?  It is just a shame more people do not know about it.