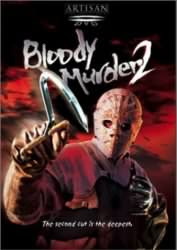 Bloody Murder 2: Closing Camp is everything that the its predecessor should have been. Here we are subjected to gore, nudity, a little better developed plot line, and much better acting.

Those of you who have seen the original Bloody Murder may a little hesitant to go for for this one because of the sheer awfulness of the first one. I promise you that this one is better. Not that that is saying much, but there is a creepy feel to BM2 and the gore has been increased quite significantly, where the first one was almost bloodless, not to mention terribly directed, acted, and developed. You know it is a never a good thing in a horror film when 99% of the stalk-and-kill scenes take place in the daylight. Bloody Murder 2 avoids this pitfall, and actually makes pretty good use of the isolated camp setting. It is like the director (who is not the same one who directed the first one) watched the first few Friday the 13th films to get his sense of how to create atmosphere and suspense with his setting. The characters this time around are more interesting, even if they are still clichés. There are some very good performances here, particularly from Tiffany Shepis, who is turning out to be quite the Scream Queen. For the most part, they avoid doing the stupid and ridiculous things that we often see in these types of films.

Another positive thing about this sequel is that we get more back story on the Trevor Moorehouse villain--where he came from, what happened to him, and why he is out for blood. Yes, the plot line is clichéd, but that comes with the genre. There are some nice little inspired moments (I thought that the shower kill scene was quite clever in the way it was handled) and overall should definitely redeem those who saw the first film.

Still, there are problems to be found. The whole "red-herring" killer attempt that was used in the first film is repeated here and handled almost as sloppily. Despite the production being a vast improvement over the first film, there are scenes that come off as being very after-school-specialish, particularly because of the selected background music

Overall, don't expect too much or any huge genre-defining moments....this is simply a slasher film that takes place at a summer camp-nothing more, nothing less.