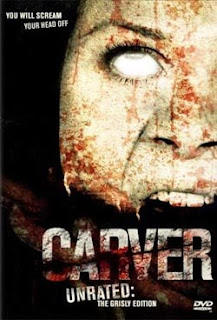 
Here we have yet another movie with one of the most clichéd plots in slasher movie history: a group of young friends travel to the country for a weekend camping trip, only to encounter a extremely brutal maniac who resides in a run down house in the middle of the woods who begins butchering them one by one. However, this is probably one of the better, more gritty and realistic takes on this plot that we have seen in quite some time.

The first thing worth noting about this film is its tone. It definitely makes no qualms about being a brutal, disturbing, and downright cruel film. From the opening murder and title sequence, there is a gritty, almost dirty feeling to film through most of its running time that is quite effective. How the director achieved this is definitely the question of the day, as I am not sure if it is because of the lighting, film stock, framing, or a combination of all, but the grittiness is definitely present. Moreover, the deaths in this film are extremely graphic and brutal and the camera does not flinch away. Everything is show in gory detail and some deaths are just extremely hard to watch because of how just downright nasty they are, such as the now infamous outhouse scene and a particularly nasty hammer and nail death scene that is also cringe-worthy. The Carver is an extremely intimidating killer and there is a sense the minute he appears on the screen that he means business and escaping him will be an almost impossible task, which it certainly proves to be. While the acting is uneven at times, it is still more competently acted than a lot of other slasher flicks lately. The characters aren't terribly annoying, and are actually somewhat likable.

However, as likable as they may be, they are still some of the stupidest characters in slasher film history. They make decisions so ludicrous that it is hard to feel bad when they meet their fate. This is best illustrated by one character, who after seemingly killing the Carver, turns the shotgun on herself and blows her brains out. Seriously one of the biggest WTF? moments I have seen in any film in recent memory. After discovering what they all agree to be real snuff films in the "abandoned" house, a few of the morons decide it is a good idea to go back to the house to return an item one of them lifted. That's right. They are far away from the house at one point, but decide to go back IN THE MIDDLE OF THE NIGHT to return something after watching videos they found in this very same house that showed people being murdered. Then, when the surviving character actually has the chance to get away, they decide it is a better idea to hang out in the house's living room to watch the tapes again! These actions end up leaving a bad taste in the viewers mouth because we can't help be to think if the characters are going to do something that stupid, then they deserve whatever happens to them.

It is these sloppily written plot details that really hurt this film. Yes, we have to suspend belief when watching a slasher film, but having characters do downright stupid, unbelievable things is going a tad too far. Still, the film is crazily effective and brutal and competently directed with a tone rarely seen nowadays. It won't be for everyone, but as a slasher film, it succeeds better than expected.

Email ThisBlogThis!Share to TwitterShare to FacebookShare to Pinterest
Labels: Carver