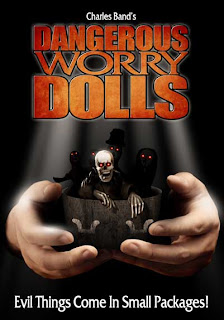 Eva (Jessica Morris), a young single mother, apparently has been a very naughty girl because she finds herself in prison for being part of an armed robbery where the clerk was killed. To top it off, apparently she isn't liked very well, as the opening scene of the film has a group of the resident bull-dyke looking inmates trying to shove Eva's hand in the garbage disposal for refusing to be part of the drug ring. The confrontation is broken up by Carl, the prominent guard, who then proceeds to beat the crap out of Eva himself, as he has a habit of doing with several of the female inmates. When Eva complains to the prison warden...wait....I'll let YOU guess and how the prison warden acts. Is she nice and understanding?? Of course not because that would go against the cliché and stereotype that this film seems to thrive on. Instead, she is a cold, heartless bitch as we have seen in countless other prison-themed films. Eva's daughter soon visits and gives her mother a gift...a tin of Worry Dolls that apparently if you confide in, they make your worries go away. That night, Eva confides in the dolls, and while she is sleeping, one of them comes alive and crawls in her ear (seriously), apparently possessing her. She wakes up with an entirely new "Screw It" attitude and begins killing off those who taunt her due to her possession.

First, there is a lot going on in this film. Too much for such a low-budget DTV film that nobody seems to know exists. There are side stories involving the head guard, which it somewhat mind-boggling in its stupidity. We also get a love-interest story involving Eva and another guard, and whiney female inmate who is also picked on by the group. The problem is that these do nothing to drive the already clichéd plot except slow the pace. The gore is virtually non-existent, so that certainly won't keep the interest of gore hounds. The acting verges from terrible to OK. I am actually surprised at Jessica Morris, who was TERRIBLE in "Bloody Murder." She is actually decent here and seemed to really get into the role. Another problem is the clichés and stereotypes that abound the plot. We have every stereotypical prison inmate you have seen present here. They are cruel, the prison warden is crooked, and the guard has his way with the inmates he chooses. We have seen it all before and it makes for some pretty boring and worthless characters. The end of the film will have some laughing, simply because one special effect that has the worry doll emerge from Eva's forehead and start grunting and moaning. Again, seriously.

I probably put too much effort into this review, as a "I thought it sucked" would have sufficed. It's an example of a film with a cool sounding premise that is executed in all the wrong ways. It's lazy, boring, goreless, scareless, and ridiculous.