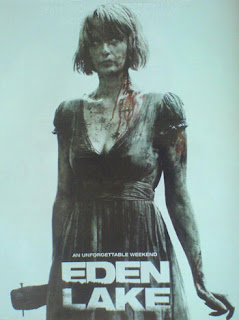 I knew "Eden Lake" would be a divisive film the minute the ending credits started to role. It doesn't take the easy, clichéd, and expected way out, and instead, opts for a more unconventional ending that has succeeded in really pissing some people off. I don't think I have heard some many gripes over the ending of a horror film since "High Tension." Despite how you feel about the ending of the film, it is undoubtedly a brutally realistic, chilling roller coaster ride getting there.

The film's plot sounds as clichéd as they come in the horror genre. A loving couple, Jenny and Steve, decide to take a weekend trip to Eden Lake for some rest and relaxation. When they arrive in town, they witness a group of unruly teens who seem to have free reign of the place. Shrugging it off, they decide to go to the lake and relax by the waterfront. It doesn't take long before the group of teens show up with their loud radio and foul mouths to stir up a little trouble. Word are exchanged, the kids leave, and the couple again shrugs the encounter off. However, later they discover that the teens have stolen their vehicle. They track them down, demand it back, and from this point forward, things spiral out of control and the film escalates in a grueling cat and mouse game, with the teens stalking, torturing, and attempting to kill the couple.

Some scenes of "Eden Lake" are just sickening to watch. Not because the director piles on loads of gore---the film is actually pretty tame in that department--but because the actions are being committed by a bunch of teenagers. A few in particular seem to be emotionless and have no sense of life or death. It is scary because we here so often about violent act being committed by young people and people claiming that adolescents are being desensitized to violence. How true that is is certainly debatable, but "Eden Lake" gives us a disturbing look at what this concept might look like and certainly it isn't all that far-reaching in its depiction.

Everything about this film, with the exception of one key scene, seems utterly realistic. Characters are flawed, and during the most intense torture scene of the film that actually had me looking away in disgust (which trust me...rarely happens!), the filmmaker showed the different reactions of the kids committing the acts. Not all of them wanted to do it...some even knew it was wrong...but they do it anyway because of peer pressure from the leader of the group, Brett (Jack O'Donnell in a powerhouse performance). A girl even stands a casually films the events with a cell phone camera. It is clearly a game for some, yet for a couple of them, they know what they are doing is completely and utterly wrong, but are compelled to play along. As the movie progresses and the violence increases, the viewer is as helpless as Jenny and Steve because their situation seems completely impossible to overcome given the circumstances. Both Kelly Rielly and Michael Fassenbender give completely believable and sympathetic performances as the couple in peril and these are two characters who we quickly form a bond with because they are genuinely nice people who are in complete love with each other.

The film is wonderfully shot with some great cinematography. The pacing is quick, and the dialogue crisp and realistic. However, one scene I found unbelievable was when driving shortly after their first confrontation with the kids, Steve notices their bikes outside of a house. He decides to stop, apparently with the intention of confronting the kids and/or their parents. He goes into the house, only to realize that the father probably isn't much better and has to escape. I just didn't think that a character would actually stop at a house to confront a bunch of kids who cussed at him, particularly on vacation. Most would have let it go and moved on.

The ending, as mentioned is either love it or hate it. I was indifferent at first, but the more I thought about it, the more I think the ending increases the effectiveness of the film. Not to give anything away, but I think it speaks volumes to the state of parental control, involvement, and lack of discipline and parenting that is prevalent in our society. It's a tough pill to swallow for some--that their attempts to be their child's friend rather than parent--could have dire consequences, but it isn't completely far from the truth.

"Eden Lake" is tough to watch and makes you think. What causes kids to become so desensitized to violence? Are parents ultimately responsible for their child's actions, particularly if they take the "my child can do no wrong!" attitude. The fact that the viewer is left to imagine just what does happen to Jenny is also pretty disturbing, particularly when the last frame of the film is the main ring-leader's smiling face.