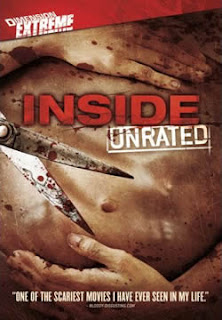 
Inside is one of the best--if not the best--horror films of the decade, hands down. One can argue about the stupid actions of some of the characters and that the filmmakers relied solely on gore to shock the audience until the cows come home, but that doesn't change the fact that this is an impeccably directed, strongly acted, and brutally disturbing piece of modern horror that is certainly heads and shoulders above anything horror that has appeared in American theaters in quite some time.

Taking its premise from a seemingly ever growing brutal type of crime, Inside deals with a pregnant young woman named Sarah who is home alone on Christmas Eve. Months before, she was in a terrible car accident that killed her husband and left her emotionally broken. She just wants to be left alone, as she states several times to her mother during a phone call. However, this desire quickly gets shattered when an unknown woman shows up at her door asking to use the phone. Smartly, Sarah refuses and asks the woman to go elsewhere. Minutes later, the woman appears outside Sarah's patio door and does not look all too pleased. Sarah calls the police, who come to inspect and find nothing. Sarah decides to call it a night at goes up to bed. However, she awakes to find the woman standing above her with a pair of scissors, and from this point forward, all hell breaks loose.

Inside is a visually stunning film and I have not seen color and lighting used so effectively in quite some time. Everything is so dark and dreary and there is always a hint of red glow present in the frame. When Sarah takes refuge in her one safe-haven throughout the film--her bathroom--the color contrast is splendid. The bathroom itself is bleach white, and when the blood starts to flow and virtually covers every square inch of the bathroom, the visual effect is astounding. The direction is crisp and tight and the filmmakers really know how to create tension and a claustrophobic feeling. Most of the film takes place in about three rooms of a small house and the viewer can feel this enclosed and helpless space. At some points, we never know quite where the killer is, but we know she is lurking.

What makes the film so grueling, though, is undoubtedly the gallons of gore that is unleashed. In a move that seems to be a negative for some viewers of the film, the screenwriter resorts to having random people enter the house, including Sarah's mother, doctor, and a few police officers, to serve the sole purpose of being victims for "La Femme." How realistic are some of the actions by these individuals, particularly the cops? Probably not really, but that does not matter here. These characters exist solely to highlight just how brutal and relentless the killer is in her quest and nothing more. And she is brutal; in fact, she is probably the most brutal female killer I have ever seen in a film. The death scenes are as gory as you are likely to see and the camera never flinches away. To some, this will be too much and they will be quick to label it "gore for gore's sake," when in fact, it is much more. "La Femme" has a distinct goal in mind and has her reasons for it. Like Sarah has been broken and left depressed by her car crash, La Femme has suffered a similar fate and is, too, is emotionally void. She justifies her actions and the extreme measures she takes to get Sarah because she truly feels that she is owed what she is after. Both women have suffered almost the exact same experience and both are emotionally numb because of it. The extreme violence that the viewer is subjected to becomes emotionally draining, and by the end of the film, the viewer is numb to it--as numb as La Femme is while she is killing. Beatrice Dalle is perfect as La Femme and has a haunting presence. She projects her ruthlessness and obsession perfectly and doesn't need a lot of dialogue to do it.

The ending of the film is extremely graphic, disturbing, and depressing. There is no happy ending here for any of the characters--how could there be after what they all, even La Femme, have been subjected to? The final 5 minutes of the film will be extremely difficult for some to watch, particularly mothers or pregnant woman, but have to be viewed as something that is a reality. Open your newspaper. Search the web. This type of thing happens more than one could imagine. The filmmakers took one of these headlines and turned into a visceral horror film that hold nothing back, but at the same time is beautifully shot and extremely well constructed. Though not for everyone, I believe true horror fans will recognize this film for the masterpiece of horror film-making that it is. Is it perfect? Hell, no. But it is about the closest thing to a perfect horror movie I have seen in ages.

Email ThisBlogThis!Share to TwitterShare to FacebookShare to Pinterest
Labels: Inside