The Clown at Midnight 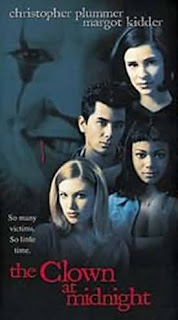 
Slasher films tended to go downhill after their popular run in the 80's. Occasionally, in the 90's, a worthy horror film would pop up, but with the release of 1996's blockbuster "SCREAM", the genre got the well deserved regain in popularity that it needed. However, with the late 90's horror film explosion, something was missing. The charm and effect of the 80's slasher was lost in the huge Hollywood budgets and hip young casts that have become fixtures of recent horror films.

"The Clown at Midnight" is an exception to this rule. With a relatively unknown cast of teens (the exception is "French Prince of Bel-Air" actress Tatayana Ali) and a foreboding setup, it manages to develop into a well crafted, well acted, creepy horror film that evokes the atmosphere and effectiveness of some of the best slashers of the 80's.

The plot centers around young Kate Williams (Sarah Lassez), whose mother was brutally murdered in an opera house years before. Some of her classmates and she volunteer to clean up the same opera house to prepare it for their college music department. Well, needless to say, an unpleasant time awaits each of them as a killer dressed as a clown locks them in the downright creepy building and kills them in very grim ways.

The Good: The film looks great. The direction is sharp, the lighting perfect, and the film stock high quality. In fact, it looks better than some of the films that have made it into the theaters recently. The plot is interesting enough, and though each character is a cliché (the jock, the bitch, the brain) the actors pull them off quite well and make us connect to them. Better yet, they are actually teenagers and not thirty year olds trying to act like teenagers. Margot Kidder and Christopher Plummer also put in strong cameos and give the film a sense of credibility. What is interesting is that the most likable characters are disposed of in the most gruesome ways which does provide some slight emotional impact. As mentioned, the setting is creepy and very effective and the killer clown lurking around is unsettling. But what I liked most about the film is the atmosphere and the fact that it doesn't try to be anything other than a slasher film. There are no comedic undertones, no over-the-top characters, just pure stalk and slash very reminiscent of the 80's. It really is one of the better post-"Scream" slasher films that actually is extremely competent and enjoyable.

The Bad: Very little, actually. Clichés do abound and it really isn't THAT hard to figure out who the killer really is. We also know from the first frame who the surviving girl will be, so any early stalk scenes with her are ineffective because we know she won't die. The ending leaves a lot to be desired and seems rushed. There really could have been a longer chase sequence and the whole "Popcorn" inspired final minute were unnecessary because, again, we know damn well who will live. The are some gruesome deaths, but most of them are very tame. This probably won't please gore hounds.

It seems this film has become quite rare. As of now, it is only available on VHS and I don't think a DVD release is planned for anytime soon. But I highly recommend this film to you lovers of the 80's stalk and slash films because overall it is an well-made and enjoyable film.

Email ThisBlogThis!Share to TwitterShare to FacebookShare to Pinterest
Labels: Clown at Midnight, The