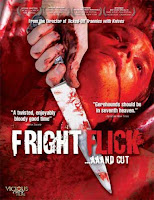 Year:  2011
Director:  Israel Luna
Cast:  Richard D. Curtin, Daphne Koury, Adam Kitchen, Natalie Jones, Tyler Brockington, Chad Allen
In the midst of filming a low budget slasher film sequel, the cast and crew begin to be stalked and murdered in the same manner in which the characters die in the script.
While certainly not overflowing with originality or premium, high cost production values, if one sits back and absorbs Fright Flick for what it is and was intended to be, it could very well be the most enjoyable slasher film of the year.  From the humor laced, tongue-in-cheek "film within a film" opening sequence that features tons of blood, boobs and (purposely) bad acting, more discerning viewers will believe they have a taste of what they are dealing with; the problem is that Fright Flick   However, the film manages to swiftly and effectively move beyond the over the top, parody-like opening scene and transition into an convincing, competent horror film, and it becomes very apparent that the filmmakers behind Fright Flick know and appreciate the genre and have more up their sleeves than simply parodying it.  Time is spent developing the characters and getting to know their quirks and personalities, which are diverse enough to never allow time to become bored.   For the most part, these are likable, fun characters who distinctly move beyond slasher cliches.  This becomes key to the effectiveness of the film because it is, indeed, the most likable characters who meet the grisly demises first.  Once the film arrives and its main set piece, an isolated, run down motel that the cast and crew are staying it, the atmosphere, tension, and pacing kick into high gear.  This is really the point where the films shines and stands heads and shoulders above other recent slasher films; while there is some obvious homage paying several particular genre favorites (the final battle between the killer and the final girl will be wildly familiar, particularly the killer's death), there is also some definite unique style.  Certain scene are framed incredibly well in order to build tension.  The deaths scenes are gory.  And there are some truly tense old school chase sequences thrown in for good measure.  Moreover, all the actors involved seem to be having a blast.

While it does have some minor faults, including having possibly two or three more characters than what is actually needed and some heavy handed humor in certain scenes that would have been more effective without it, Fright Flick is a highly entertaining, vibrant return to form for the slasher film.  It's unapologetic in what it is and is a paramount example of a filmmaker's fervor and creativity overcoming any budget restraints.  While some viewers, particularly those not schooled in the golden age of the slasher film, may not "get it," true, die-hard horror fans should definitely appreciate the effory and find this one to be a worthy addition to their collection.