Interview with Director Lucky McKee of The Woman and May.

In 2003, an independent horror film by a new, virtually unheard of director and screenwriter took the horror community by storm, earning wide critical praise and establishing the filmmaker as a force to be reckoned with.  The film was May,which told the story of a shy, introverted young woman played brilliantly by Angela Bettis, who slowly transcends into madness, resorting to horrific measures in order to keep those she admires close to her.  The film earned five Fright Meter Award nominations, winning two awards: Best Horror Movie and Best Actress in  Leading Role for Bettis.

Now, McKee is back and is once again earning high praise from critics with his film The Woman, adapted from the novel he co-wrote with revered horror novelist Jack Ketchum.  The film tells the story of the last remaining member of a savage cannibalistic family who is discovered by a seemingly all-American family, led by patriarch Chris Cleek.  Cleek makes it his goal to tame The Woman, but with his attempts, it becomes increasingly difficult to tell who the true savage is.   The film recently earned three 2011 Fright Meter Award nominations, including Best Horror Movie.

We got the honor to interview McKee about The Woman.  Read below and enjoy the interview with this extremely talented writer and director. 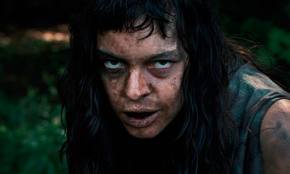 
Thanks. It's an honor just to be nominated (yuk, yuk).
As far as what I can tell you about myself, most of that stuff is on the web. I'm a tall geek that makes shit up and films it. I have no other hobbies than cooking a good meal every night. Movies are my life.
How did you become involved in the writing and directing of the film adaption of The Woman and what about the story made you want to be involved?

I liked what Pollyana did with her character in OFFSPRING. Ketchum and I thought she should have a movie devoted to her. So we hooked up with Andrew van den Houten and told him a new yarn. He dug it and Ketchum and I wrote the book and script concurrently. So, the major factors that made me want to do it were a great actress, a legendary co-writer, and a producer that would give me creative freedom. All of those things paid off in more ways than I could have imagined.
The Woman marks the third time you have worked with Angela Bettis, the previous being of course May and then Sick Girl, your contribution to the Masters of Horror series.  What is it about her that you draws you to collaborating with her?

She's got a gift. And we like and understand each other as people. I'm in awe of her every time we work together. She always surprises me. And she's a good person. One that makes you feel good when you're around her.

From a directorial standpoint, what was the most difficult obstacle you encountered why filming The Woman?  Any interesting stories from the set?

The most difficult obstacle is always time and resource. There's never enough, whether you have a ten dollar budget or a ten million dollar budget. On the flipside, though, that's part of the fun. Having to think on your feet and still tell an involving story.
The most interesting moment on set was when we had a baby and a wolf interacting with each other live on set.  It was a trip and a half to watch that go down.

The Woman contains some extremely brutal and horrific scenes of violence.  What was the atmosphere like on the set?  How did you go about keeping the actors in character and/or lightening their moods during these harsh scenes?

The atmosphere on set was very positive, but it was also very tiring. The actors handled the dark stuff better than I did. At one point, while shooting one of the most difficult sequences in the film, I had to have someone go get my dog so I could look in it's eyes for a bit to calm myself down. Thank god for animals and their purity is all I have to say about that.


I have read reviews that call The Woman misogynistic or, to the other extreme, man-hating.  What are your thoughts on this?  As a director, do you overly concern yourself with how specific elements of your films are going to be criticized?

Well, I'm not a mysogynist (I can't even SPELL it), or a man-hater, but those people exist and that was the story we decided to tell. To soften it or pussyfoot around the reality of situations and characters like that would have been even worse. As far as criticism, I love fucking with people's perceptions, so this has all been a blast for me. As long as the film sparks meaningful conversation, I think I've done my job.

How do you feel about the rash of recent horror remakes?  If you were given the chance to remake a horror film, which one would it be and why?


Remakes are just part of the game now. Why make a new soda, when you can just call it Coke and make a new can? It's much riskier to try something original. There's no particular horror film I would want to remake, but I would never close myself off to the opportunity if the material had something in it that gave me an emotional response that I thought I could turn into something unique and in my own personal style.
So what’s next for you?  Any upcoming projects?

I'm writing the next one and hoping to do some shorts and television directing in the meantime if the opportunity arises.


Thank you so much for taking the time to chat with us.  Any final comments?

Thanks so much for honoring our film (and my first film). Rock and roll. Catch you on the next one.