Monsters in the Woods 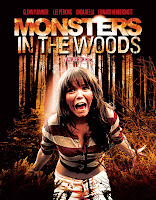 Year:  2012
Director:  Jason Horton
Cast:  Glenn Plummer, Lee Perkins, Linda Bella, Edward Hendershott, Claudia Perea
An independent film crew ventures deep into the desolate woods to film a gore soaked horror scene in hopes that it will spice up and garner interest in their otherwise blandly received production.  Unbeknownst to them, however, a pack of vicious creatures are using the very same woods as their hunting ground.
There are a more than a few moments in the opening scene of Monsters In The Woods where the viewer will be struggling not to cringe at what is playing out on screen, not because of how gruesome or terrifying it is, but because of how over the top hammy and ridiculous it is.  However, when the true nature of the scene is revealed, the cringing will quickly change to delighted giggling.  In just one of the many seemingly self-referential pokes at low budget filmmaking, the opening scene quickly establishes that the action is taking place on the set of a low budget independent film.  Through the lense of the crew’s camera, we are introduced to a hapless group of next Hollywood superstar hopefuls.  And while it is abundantly clear that none of them will be the next Streep, DeNiro, or Speilberg, they each seem to be steadfastly committed to the project at hand, going as far as all agreeing to continue with production after their director has been accidentally killed.  During these scenes, which comprise the first half of the film’s running time , the story is told strictly mockumentary style and  pays homage to the “found footage” sub-genre that has become a phenomena over the few years.  These scenes contain some playful moments with humorous subtle references that horror fans will recognize and it is these fleeting moments in the film’s lengthy exposition that provide some genuine entertainment.   However, this portion of the film is also the most problematic.  Outside of the few comedic moments, not much happens.  The characters are one dimensional and are not fleshed out enough for the audience to really care about them.  Moreover, one of the great benefits of the found footage/mockumentary style is that it allows a fairly effortless means to create tension and suspense.   This benefit is never taken advantage of and even during the few scenes that could possibly allow for a suspenseful build up, the opportunity is squandered in exchange for rapid action with very little impact.  As a result, the film begins to lose pacing rather quickly and even the sprinkle comedic winks to the genre cannot maintain a consistent interest in the plodding plot.
However, there comes a point about halfway through the film when director Horton totally abandons the confines of the mockumentary style and allows the film to transition into the traditional storytelling mode.  This is a wise decision and either he recognized the limitations and challenges that the former presented him and the intention of the film itself, or he is one that appreciates mixing expectations up for his audience.  Either way, it is the point where the film really becomes alive and worthy of its malevolent sounding title.  With this abrupt shift, the film introduces two new characters who are privy to just what the monsters truly are and are on a mission to destroy them.  These are both intriguing and likable characters who offer a departure from the typical helpless victim stereotype.  When the monsters, which look like a cross between a giant crawfish and crab attack, the action is swift, dizzying, and effective.  The pacing is amped up quite a bit and the action is exciting.  Certainly the film’s tiny budget is noticeable throughout, but there is an obvious attempt to make the best of what is had.  Certainly the monsters, as ridiculous as they may first seem, are an example of the resourcefulness of the filmmakers despite their budget limitation and it is pleasing that they are not some hastily done CGI effect.  Additionally, the story behind the monsters and their rampage is unique and highly ambitious; how wonderful to see a filmmaker trying to break the mold of what genre fans have been conditioned to expect from such films.  The film’s climax also doesn’t follow the anticipated route, and though this type of climax/resolution has become something of a genre cliche, it is effectively pessimistic here because of the discovered nature and intent of the monsters.
Monsters in the Woods is an admirable and extremely unique genre entry and should be lauded as such.  Still, it cannot be ignored that the first half of the film does not pack the punch that it should or could have, but the second half of the film is executed well enough to allow the first half to be somewhat forgiven; after all, it's not a complete failure and does provide some clever winks and homages.  And certainly director Horton deserves praise for not being confined by the expectations that the film sets early on and completely switching style and tone halfway through because this is one of the rare instances where it works and, in fact, is welcomed.
Fright Meter Grade:

Email ThisBlogThis!Share to TwitterShare to FacebookShare to Pinterest
Labels: Monsters in the Woods