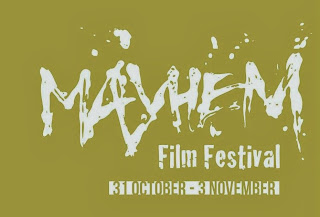 Last year I only got to see one film at my local horror film festival (Nottingham, UK) and that was American Mary. This year, although unable to attend the whole festival, I managed to make it one whole day instead!

Upon arriving I sat down in the cinema bar, with a Corona, and said hello to festival organisers Chris Cooke and Steven Sheil (Director of Mum & Dad [2008]).

Here's what was on:

The Demon's Rook
Written and Directed by James Sizemore.

Synopsis:
A young boy named Roscoe finds a portal to another world where he is taught magic by an elder demon known as Dimwos. Dimwos raises the boy into manhood, revealing to him many secrets.

It was a cracking start to the day, filled with blood, guts and gore!
For my full review head here -  http://mavensmovievaultofhorror.blogspot.co.uk/2013/11/the-demons-rook-2013.html

Kiss of the Damned
Written and Directed by Xan Cassavetes.

Synopsis:
The vampire Djuna resists the advances of Paolo, but soon gives in to their passion. When her trouble-making sister unexpectedly comes to visit, Djuna's love is threatened, and the whole vampire community becomes endangered.

It was my 4th time watching this film and seeing it on the big screen made me fall in love with it even more! Here's my review - http://mavensmovievaultofhorror.blogspot.co.uk/2013/03/kiss-of-damned-2012.html

The Borderlands
Written and Directed by Elliot Goldner.

Synopsis:
Follows a team of Vatican investigators sent to the British West Country to investigate reports of paranormal activity at a remote church.

This is possibly one if the best found footage flicks I've ever seen! You can read my review here - http://mavensmovievaultofhorror.blogspot.co.uk/2013/11/the-borderlands-2013.html


I also got to meet the producer Jennifer Handorf, the writer/director Elliot Goldner and the 2 lead actors Gordon Kennedy and Robin Hill.

And, yes, I have a broken arm!

There was also a Q&A session with them after the screening of the film. You can check it out below. I have to warn you though, there are a couple of spoilers towards the end of the interview!


Scary Shorts:
This was a selection of short horror films that ranged from the very clever, the down right insane, disturbing and side splitting hilarious!

Hell No! (4 mins, Director: Joe Nicolosi)
HELL NO is a short movie trailer that explores what would happen in horror movies if smart characters made good decisions. "Spoiler Alert: Everyone Lives"

8.47 (12.03 mins, Director: Nik Kacevski)
Maia will do anything to save her sister, but in this sci-fi time travel thriller, she will only have one breath.

Grandpa (15 mins, Director: Leslie Simpson)
Milo is a troubled kid. He's having night terrors, little accidents, and his only friend has lost an eye. Luke, his father, is blind to Milo's problems, He's overworked, underpaid and up to his eyes in debt. They live in Grandpa's old house: not so much an inheritance than a millstone round their necks. But something is changing. And Grandpa keeps watch.

The Apocalypse (6 mins, Director: Andrew Zuchero)
Four uninspired friends try to come up with a terrific idea for how to spend their Saturday afternoon.

Tightening Our Belts (9.15 mins, Director: Jordan Shankman)
On Halloween night, a father searches for his son and comes face to face with pure evil.

The Policeman's Story (7.20 mins, Director: Tristan Ofield)
Responding to a concerned neigbour, a Policeman arrives at a home in the dead of the night to search for Mr. Groboski who has been missing for the past 3 days.

An Alien Claymation (3 mins, Director: Lee Hardcastle)
Dad invites Alien visitors into his home then ends up fighting them.

Home Movies (40 secs, Director: Jordan Morris)
We tried to think of the most twisted, depraved and horrifying film we could make in under a minute, Home Movies was the result, you have been warned......

Fist Of Jesus (15 mins, Director: Adrian Cardona & David Munoz)
Jesus is always willing to lend a hand to those in need... but there are others that will taste his fist!

Rellik (5.18 mins, Directors: David Lilley)
Starting at the end and returning to the beginning, 'Rellik' retraces the steps that lead to a woman's horrific murder. A secluded wood. Two masked perpetrators. Who are they? What is their motivation?

Biocop (5 mins, Director: Steve Konstanski)
A fake trailer about a mutated cop who cannot die and his stuggles to stop the latest designer drug.

I can honestly say, I've never watched a collection of shorts all together that were as good as each of these!

The Machine
Written and Directed by Caradog W. James

Synopsis:
Britain is in a Cold War with a new enemy, the Ministry of Defense is on the brink of developing a game-changing weapon. Lead scientist Vincent McCarthy provides the answer with his creation, ‘The Machine’- an android with unrivalled physical and processing skills.

This film is a sci-fi thriller, and an amazing one at that. It's up there with the likes of Blade Runner!

I said a quick hello to Caradog W. James and also got the chance to video the Q&A session after the film. Check it out below...

The day ended with a classic. A classic that I hadn't actually seen before so it was a treat to see it on the big screen. 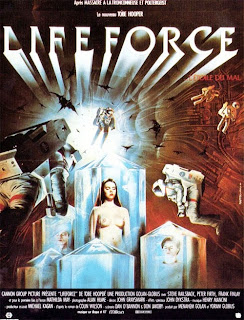 Lifeforce
Directed by Tobe Hooper.
Screenplay by Dan O'Bannon & Don Jakoby.
Based on the novel "The Space Vampires" by Colin Wilson.

Synopsis:
A space shuttle mission investigating Halley's Comet brings back a malevolent race of space vampires who infect and transform most of London's population. The only survivor of the expedition and British authorities attempt to capture a mysterious but beautiful alien woman who appears responsible.

It truly was an awesome day and next year I plan on attending at least a couple of more days. I would like to thank Chris, Steven and all the Mayhem crew for making it a memorable time.