Ahhhh, the 80's.  To most die-hard slasher fans, they represent the "golden age" of the genre.  I have very fond memories of going to the local mom and pop video store as a kid and being in awe of the plethora of new VHS cover art staring back at me from the shelves.  It seemed that new slasher flicks were being released by the bucket load each week.  While some of them were pretty terrible, others aided in defining the decade.

The problem was that by the end of the decade,  plots became formulaic and stale: gather a bunch of young people in a remote location and have them get killed off one by one.  Many slasher fans accepted this and, instead of searching for unique plots, they instead focused on the next best thing: the kill scenes and gore!  After all, what would a slasher film be without these elements?  Luckily, filmmakers were happy to oblige, as each new film released seemed to be trying to out due the last in terms of bodycount and gore.  And while there are literally thousands of death scenes displayed throughout the hundreds of slashers released during the decade, a few stand out as being truly memorable because of their sheer nastiness.

Here are my Top 10 choices for the nastiest and most disturbing kill scenes from the 80's slasher era:

10.  Ice Skating Death from Curtains
Curtains stands out as one of the better of the slashers released during the 80's: the cast, the production values, the tension all come together perfectly to form a more clever and serious slasher than was being released during this time.   However, one murder sequence definitely sets the film apart.  A young actress hoping to land a coveted role goes out for a morning ice skate only to be stalked by an unknown killer in a hag mask.   Let's be clear: this scene in not on the list because of gore, but because it truly is a terrifying scene.  It's incredibly shot, thick with tension, and the image of the figure skating in the hag mask and armed with a sickle will not soon be forgotten. 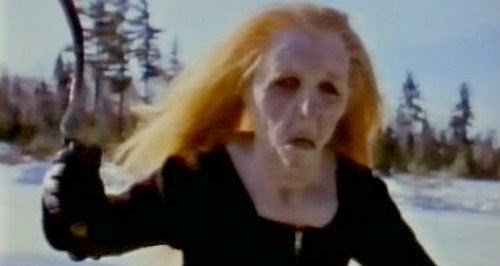 9.  Deer Antler Impalement from Silent Night, Deadly Night
One of the most controversial slasher films of all time, Silent Night, Deadly Night was protested by angry parents and religious groups and had its theatrical run cut short because of the uproar.   And honestly in hindsight,  it is sort of understandable why these people were upset, as Silent Night, Deadly Night does seem to bask in the glory of splashing the traditional peacefulness of the Christmas holiday with blood and gore.  The most memorable death scene involves a half naked Linnea Quigley meeting her fate on a pair of deer antlers.  It's a nasty scene that scores points for creativity and for boldly showing the impalement and its aftermath. 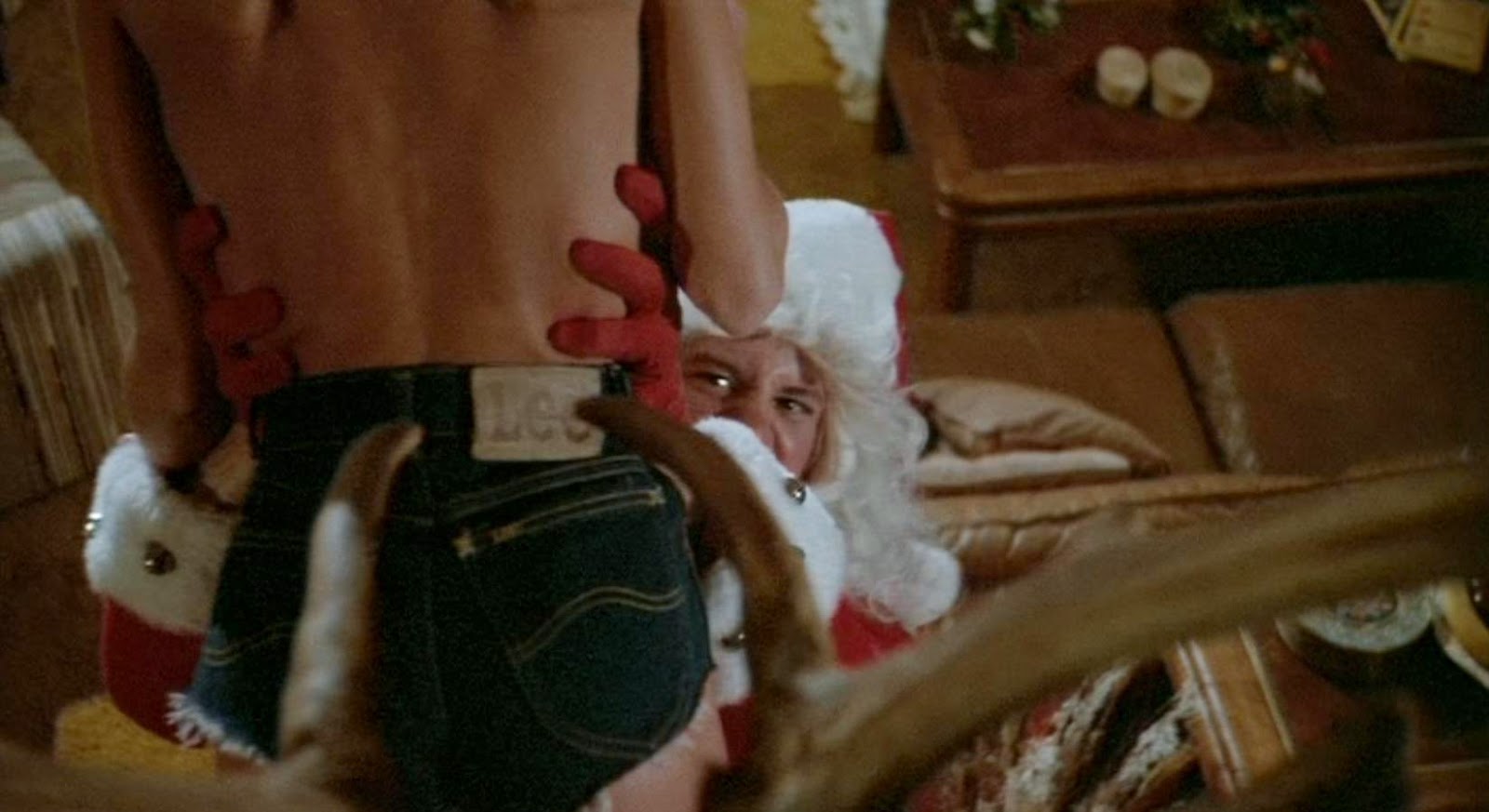 8.  Raft Massacre from The Burning
The Burning is an interesting little summer camp slasher that has successfully shed the initial stigma of  just being a Friday the 13th clone.   The story of Cropsy, the camp caretaker who returns to take revenge for having a horrible prank pulled on him does mix up slasher conventions, giving us a final guy instead of the trademark virginal girl.  It also contains a downright nasty little scene where Cropsy succeeds in taking out an entire raft of campers with a single pair of gardening shears!   With special effects by Tom Savini, the scene is orchestrated brilliantly.   We do not see it coming, as we are conditioned to believe the cliche of safety in numbers.  Moreover, the pain inflicted on our young victims is palpable.  Fingers are chopped off, throats are impaled and the camera never flinches away. 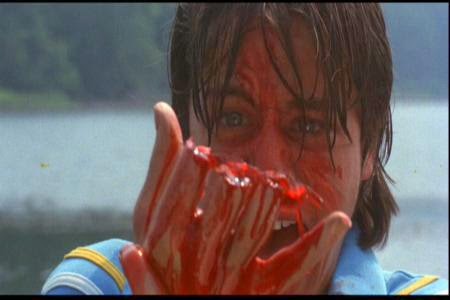 7.  Curling Iron in the !*$@# from Sleepaway Camp
Another summer camp themed slasher, Sleepaway Camp deservedly enjoys a massive cult followings.  It's a clever and mean-spirited little film made all the more disturbing because the kids actually look like kids!  Besides having one of the most ballsy (no pun intended) and shocking twist endings in the history of film, it also contains some surprisingly graphic murder scenes.  However, it is the film's least graphic murder, at least in terms of what the audience sees, that makes this list.  Camper Judy, a hateful little bitch that you want to punch every time she is on screen, relaxes in her cabin only to be punched and then have a hot curling iron inserted into her.......well you know.   I have to admit that when I first saw this film, I was not sure what exactly was happening.  Chalk that up to being young, but upon multiple viewings, it becomes blatantly obvious where the curling iron is inserted.  It was wise that the the audience isn't shown much; it makes the sizzling sound effect and Judy's screams much more agonizing.

6.  Drill Through the Head from The Gates of Hell
Okay, it's technically not a slasher film, but The Gates of Hell (AKA City of the Living Dead) is a gory and batshit crazy little from Lucio Fulci that contains a death scene too horrid to pass up.  Forget the scene of the girl being forced to puke up her own guts; the scene where a girl's boyfriend meets her angry father, who proceeds to slowly and maniacally push his head into a large table drill is even more disturbing.   First, there is the slow build up as the poor fellow's head is pushed closer and closer to the spinning drill bit.   We the audience wonder "are they really going to show that" and we brace ourselves.  And yes, they really DO show it.  The camera never flinches away as the drill better enters one temple and emerges from the other in amazingly realistic fashion.

5.  Rat Eats Through Stomach from Epitaph
Epitaph is a little seen slasher from the mid-80's that could be summed up as a guilty pleasure.  It was released on DVD  by Troma back in 2007 under the title Mommy's Epitaph.  Despite being poorly made, it truly is an intriguing little film about a homicidal mother and the family who deals with her crimes by moving from city to city so she isn't caught.  In this particularly nasty scene, the mother ties a helpless psychiatrist, who she discovers has been masquerading as a friend to get details on the mother's life,  in the basement.  Mother proceeds to take a hungry rat, place it in a metal bucket and tie the bucket to the pleading woman's stomach.  She then uses a blow torch to force the rat to eat through the woman.  It truly is a vile scene that I am surprised is not more well known. 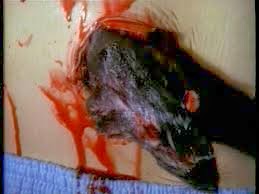 4.  Double Axing from Nightmares in a Damaged Brain
Gritty, grimy, and unrelenting, Nightmares in a Damaged Brain (AKA Nightmare) is one of the "video nasties" from the early 80's.  It's a grim film, with a dark and sinister tone similar to Maniac, which it is often compared.  It is one of those films that you feel the need to shower after viewing it.  And no scene contributes to this better than the scene where the antagonist has a flashback to murdering his father and his mistress as a child.  He catches them having kinky sex, and instead of running away screaming with his eyes covered like a normal child, he does the next best thing, grabs an axe and proceeds to hack them to death.  It's an insanely bloody and violent scene, made all the more disturbing by the fact that a child is the perpetrator. 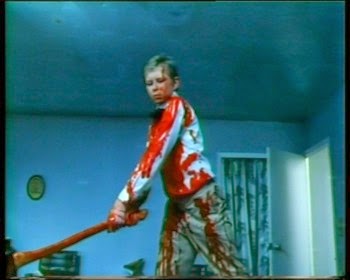 3.  Fishing Gaff in the !*$@#  from The Mutilator
The Mutilator truly is the quintessential 80's slasher film.  This is not saying that it is necessarily a good film (though I do think it is better than it is given credit for), but that it captures the qualities of the slasher genre perfectly.   The isolated beach setting creates a tense atmosphere, and the murders are certainly gorier than a majority of what was being released during this time.  The mean-spirited scene that makes this list involves the killer slamming a girl onto a garage workbench and then forcefully inserting a large fishing gaff in between her legs and maneuvering just right so that the tip emerges from her belly.  It's an unpleasant scene to watch--even for males--mainly because the killer seems to be getting off on his deed. 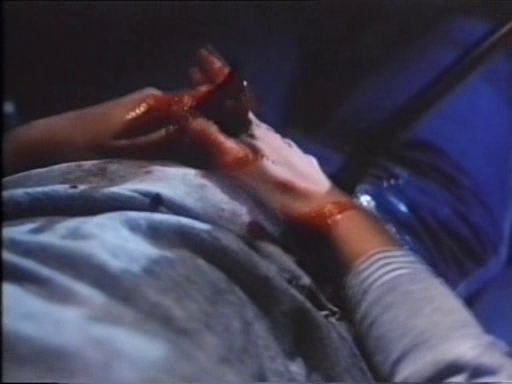 2. Bayonet Through the Skull  from The Prowler
The Prowler is a gem of a film that still to this day is Tom Savini's crowning achievement in terms of special effects.  It deals with a killer disguised in a World War II get up who stalks and butchers a group of college students during the night of their annual dance.  The film succeeds by layering on the tension and atmosphere and director Joseph Zito, who would go on to later direct Friday the 13th: The Final Chapter skillfully demonstrates his penchant for the genre.  While all the deaths are violent and gory, one stands out as being particularly unpleasant.   A young man preparing to get into the shower with his girlfriend has a bayonet driven through the top of skull until it exits his chin.  The scene is cringe-worthy for several reasons, one being the sound effect of the blade entering the skull. Savini's attention to detail is often displayed, as the victims eyes roll to the back of his head and he heaves for air and relief. 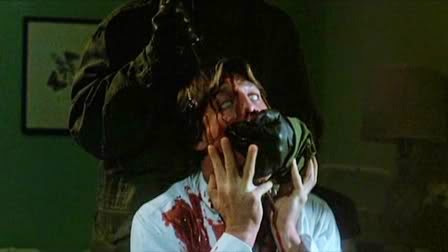 1.  Bandsaw Lobotomy  from Intruder
Perhaps the last great slasher film of the 80's, Intruder came along at a point when the slasher genre was virtually on its last leg.  Fans had become bored with the stale and predictable formula.   Though Intruder does not stray too far from the slasher formula, it does set itself apart with fairly likable characters, an interesting setting, unsettling atmosphere, and some very stylistic camera work and direction.  The kills are quite brutal; a guy gets his head crushed in a trash compactor (which easily could have made this list), another is lifted and impaled on a meat hook.  However, it is the infamous "bandsaw lobotomy" scene that stands as being the most disturbing and cringe-worthy death scene from any 80'slasher film.  A young worker has his head fed through a meat saw.  What makes this scene so damn disturbing is (a)how realistic the whole thing looks...seriously, check out when the saw hits the dude's teeth! and (b) the camera never, ever flinches away, even as the poor guy's head splits in two.   I truly have never seen anything like this scene since.  Truly unforgettable. 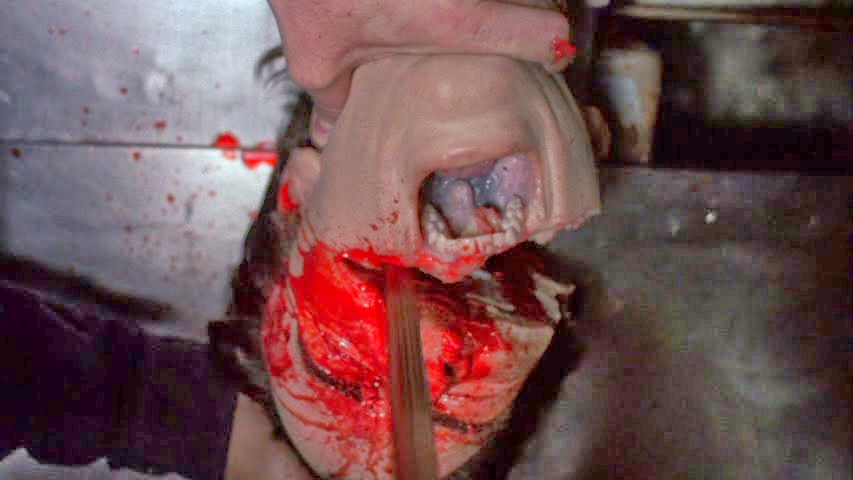