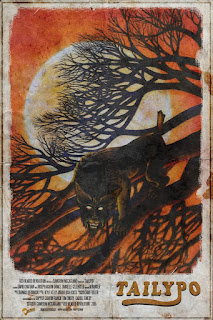 Some great news for indie horror filmmaker Cameron McCasland, director of The Lashman!
Congratulations, Cameron!  It is always great to see horror honored by the mainstream awards.  Now bring that Emmy home!

Nashville, TN (11.20.2015) Cameron McCasland of Red Headed Revolution was nominated for an Emmy award for his short film Tailypo in the Program Director category at the 30th annual MidSouth Emmy Awards Thursday night at a ceremony held at BMI in Nashville, TN.

McCasland said of the nomination for Tailypo. “I am just so thankful to my cast & crew and the good people at Copper Canyon Ranch who opened their home to us to get this made. I carried this story around for a long time, and its really nice to see it connect with viewers. Thanks to NATAS for being so gracious. We are all over the moon.”

The film premiered online earlier this year and made the jump to the big screen winning awards at The Best Shorts Competition, Imaginarium Film Festival, The IndieFest, as well as screenings at multiple film festivals in The United States, Canada, and Russia.

McCaslands Tailypo is a re-telling of the classic American folk tale, a reclusive man (played by David Chattam) living in a cabin with his hungry hunting dog are stalked by a creature with sharp teeth, claws, and glowing yellow eyes after a blind shotgun blast severs the creatures tail. The hermit begins to question his own sanity as the unseen menace lurking in the shadows of the lonesome woods hauntingly taunts “tailypo, tailypo, give me back my tailypo.” Voiced to eerie perfection by Penny Dreadful herself, Danielle Gelehrter.

The director first heard of the story as a kindergarten student at Edgewood Elementary school in his childhood hometown of Edgewood, Texas. McCasland spoke about its origins, “The campfire tale was a Halloween favorite from two of my teachers, Carolyn Hooks and Darlene McEnturff. Its one of the first things i can remember really creeping me out as a kid. The thing just stuck with me, and It felt really good to get it out of my head and up on the screen.”

This marks the sixth Emmy nomination overall and first in the directors category for McCasland who has previously been given the nod in writing and producing categories for his work on the “Go Green With Dr. Gangrene” series of shorts, and his made for tv movie “The Dreadful Hallowgreen Special”.

You can see the award winning Tailypo as well as other work from Cameron McCasland at the website www.redheadedrevolution.com or find him on twitter @CamMcCasland

The 30th annual MidSouth Emmy awards will be announced Saturday ,February, 27th 2016 during a banquet and live telecast from the Country Music Hall Of Fame & Museum in Nashville, TN. For more information and to see a full list of nominees please visit emmynashville.org