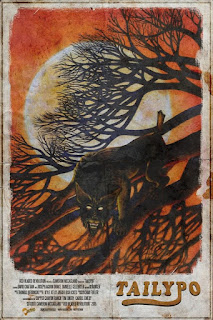 Cameron McCasland has been making a name for himself in the independent horror community for the last several years.  His first full length feature film The Lashman has garnered high praise at several film festivals as was nominated for Best Independent Feature Film at the Rondo Hatton Classic Horror Awards.  The praise continue this year as he was recently nominated for an Emmy for his latest offering, the short genre film Tailypo.  We had the opportunity to discuss this project, as well as the horror genre in general with him.

Check out our conversation below:

First, congratulations on the Emmy nomination for Tailypo!  That is a pretty huge honor for a genre filmmaker!  For those who may be unfamiliar with you and your work, can you tell us a little bit about yourself?

Thank you so much. We go to the awards show this Sunday. Hoping for good news. Let me see. I was born and raised in East Texas, but I live in Nashville, TN with my wife and two daughters. I produce movies, music videos and television. I directed a feature length slasher film called The Lashman about a ghostly cowboy who terrorizes with an axe and a bullwhip. My newest film that is touring festivals now and just this week was nominated for the Rondo Hatton Classic Horror Award for best short film is titled Tailypo. Its a little cryptozoology tale of Appalachian folk lore which i heard for the first time as small child.

What films and/directors inspired you to make horror films?
When I was young, I was forbidden to see a lot of the modern horror movies, but I was able to watch things like the Universal Monster films Frankenstein, Dracula, and the Wolfman. I also had a steady dose of Alfred Hitchcock. I’m thankful for that now, as it helped me build humanity in monsters. And to be honest, it made that forbidden fruit all that much sweeter when I would catch them at a friend’s house or sneaking it in on late night TV after my parents went to bed.

As far as film makers go. Roger Corman, Robert Rodriguez, & Sam Raimi are all people that have inspired me in one way or another. I constantly ask myself how those guys would get the story told when faced with adversity.

Speaking of inspiration, what inspired you to make Tailypo?
Well it was inspired out of just basic good old storytelling. When I was a kid it was a story that was told around Halloween in our elementary school. Both Carolyn Hooks and Darlene McEnturf told it in the classroom. My mother and grandmother echoed them at some point, as did a babysitter I had named Lisa Munro (who had also went through the same school) The story just stuck with me. It was one of the first things I can recall scaring me. But in an exhilarating kind of way.

So when I met David Chattam (who stars in the film) on the Lashman it came back to life in my head. I took the bones of the story I remembered and put my own voice to it in the writing. I then turned that over to David to bring it to life in the way that actors do.

What were some of the difficulties encountered while filming Tailypo?  Any interesting stories from the set you can share?
When we went back for reshoots it was winter, and David had to strip down for the bedtime scenes. It was probably in the 40s that night. He joked about having to be the only one who had to be cold, so I stripped down to shorts and shirts, and both Josh Ickes my D.P. and Kyle Kelly who assisted camera and edited the film followed suit. I think David appreciated the support.

And directing a dog was interesting. I kept a pocket full of pepperoni and beef jerky to will him to do things. He was ok with almost everything except the actual gunshots, where he would take off and hide for a half hour at a time.

You also recently finished up a full length feature horror film, The Lashman.  Tell us about it.
The Lashman is a ghost story of sorts. I wanted to make a classic slasher tale that took place in a time before cell phones and GPS. We shot it at the Copper Canyon Ranch in Hopkinsville, Kentucky (where we also made Tailypo). It stars Stacey Dixon, David Vaughn, Shawn C. Phillips, Jeremy Jones, Kaylee Williams, Tim Emery, and Lee Vervoort as the title character as well as a great supporting cast. It’s a classic tales of campers who get in to more they can handle when a bullwhip wielding axe carrying killer comes knocking on their cabin door. It has been playing at genre festivals steadily now since 2014 and somehow has yet to leak online.  Looking forward to a DVD release soon so more people at home can see it. But it’s been really cool seeing it up on the big screen like this. I feel like a lot of indie genre movies don’t even attempt that anymore which is a shame.

Since you have done both short films and feature length films, which one do you prefer?
Well, I’m thankful to live in a time where you can make something as long as it needs to be and people will watch it. Short films used to not see the light of day outside of film festivals, but now with the advent of the internet and everyone looking for quick content to watch on their phone during commutes, I think that’s changing. They both present certain challenges. A feature allows you more time to flesh characters out. I can’t say I prefer one to the other, but I do realize a lot of people think it odd of me to go from a feature to a short film as most people tend to graduate from one to the other. I don’t see it that way at all. I just tell the stories I want to tell, and rather than pad it out to meet an arbitrary running time.

What are some of your favorite horror films from the past few years?
I really enjoyed the Iranian vampire film from Ana Lily Amirpour A Girl Who Walks Home Alone At Night which I saw here in Nashville at our Belcourt Theatre. I thought it was just mesmerizing. I got a chance to see Corin Hardys The Hallow which I think they are now calling The Woods on Halloween at Frightening Ass Film Festival where Tailypo was playing. It was great. Honestly that’s a film festival people need to be checking out. Chris Dortch who programs the Chattanooga Film Festival puts it together every year on Halloween and it's killer.

But honestly, I’d say people really ought to be paying more mind to the indie stuff. Dustin Mills who did our Tailypo creature design has been churning out 3-4 genre bending movies a year as of late. Really subversive stuff. And Brian Williams made a movie called Time To Kill which was great. I’d like to get both him and his wife Ellie Church into something soon. They both have been working on some great stuff like Headless, Frankenstein Created Bikers, and Harvest Lake which I’m going to get to see soon at The Drunken Zombie Film Fest. Excited about that one.

Any advice you can give for new filmmakers and those thinking about making their first film?
More than anything, just get out and do it and don’t be afraid to suck at it honestly. It’s really hard to make something great right out of the gate. Takes time, practice, and patience and even then you still fall flat sometimes. You just have to start and not stop. Over time you get better. I think young film makers need to realize this. And in a way so do audiences. The one downside to modern internet distribution is that someone just started out is judged on the same level as a Hollywood film, and that’s not entirely fair. I look for potential in people and their work. For those that stick to it they usually fair out pretty well.

What's next for you? Any upcoming projects you can share with us?
I'm in post production on a movie I produced for Matt Riddlehoover called What’s The Matter With Gerald that should start screening at festivals soon. I also just wrapped a short film version of H.P. Lovecraft's Beast In The Cave which should be up soon. And Josh Ickes who was the Director of Photography on a number of my projects has a new short called Heart Of The City which is coming out real soon. I worked as a producer on that. That’s the stuff thats already in the can. I’ve got both a western and a car chase movie in development. And a few more shorts i hope to collect in to an anthology hosted by Larry Underwood as Dr. Gangrene. Tailypo will probably end up in that too.

How can readers see both Tailypo and The Lashman?
My website www.cameronmccasland.com is the best place for that. That also has links to my Twitter, Facebook, Instagram, YouTube, and is kind of the central hub to find me on the web. Tailypo is up there to watch for free, and The Lashman trailer is up there and will be out on DVD this year. We have a few more Film Fest screenings coming up for it and Tailypo. See It on the big screen at Drunken Zombie Film Fest in Peoria, IL, Crimson Screen Horror Film Fest in Charleston, SC , The Madhouse Movies Film Festival, The Best Film Fest, and a few others I can’t announce just yet. But if you follow me on social media you will see new screenings as they come up.

Any final thoughts/comments?
I’d say that the best thing you can do for any film maker or creative person in general is to support their work. Donate to the their crowd funding if you can, share their posts on Facebook, Retweet them on Twitter, and just tell your friends about things you like when you see them. It means the world to us. And it makes a difference as we don’t have money for advertising most of the time. And honestly, if you want to lend some support in that fashion to me you can do so by sending in a vote for Tailypo as best short film at the Rondo Awards. You can check out the full ballot at Rondoaward.com and to email simply send a email to taraco@aol.com with your favorites. Vote in as many or few categories as you want. to vote Tailypo just send a email with your name and say Tailypo for best short film.

Thanks so much for the interview. See you at the movies.