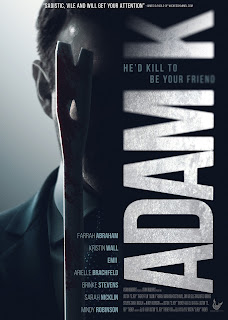 Home video will see the DVD/Blu-ray release on Halloween 2016, with the VOD and On-Demand release scheduled for November 22, 2016.  DVD/Blu-ray Pre-order Packs are available starting August 29th.  Check the Facebook page for more details atwww.Facebook.com/AdamKTheMovie as well as the Twitter page atwww.Twitter.com/AdamKTheMovie

Synopsis:
When a lonely, awkward insurance claims adjuster is rejected, only the blood of his victims can keep him warm.  In this horror/thriller – referred to as “Sadistic, Vile and Will Get Your Attention!” and “A Dementedly, Fucked Up Slice of Humanity” – watch as ADAM K kills to be your friend.