The Fight Against Time: Prince of Darkness

Here we will examine older horror films and see how they stand up to the test of time. 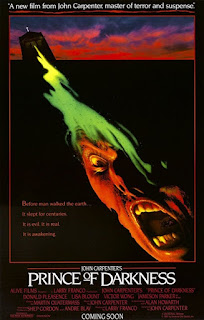 “Prince of Darkness” stars Jameson Parker, Lisa Blount, and a host of Carpenter alumni like Donald Pleasance, Dennis Dunn, and Victor Wong. In this movie an old priest dies, leaving behind a diary and a mysterious key, which a fellow priest played by Donald Pleasance takes guardianship of. Fun fact, Pleasance’s character is never given a name throughout the entire film. Finding something inexplicable in the basement of the church the dead priest had come from leads him to contact Professor Birack, a well-regarded theoretical physicist he knew, to try to figure out what is going on. After being shown what is in the basement, Birack recruits some of his best students, as well as students and professors from a couple other departments, to help with the study. As is usual in horror, shenanigans then ensue.

What worked about this movie then generally still stand up now thanks to the scares being based off of the creepy atmosphere of a mostly abandoned old church and practical effects. The scares are also based off of general fears instead of in your face “boo” scares. The vacant eyed, aggressive homeless person; drowning or choking; and bugs, oh dear God the bugs! The philosophical debates presented in this also still work, as the priest and Birack debate religion versus science, and others debate good versus evil, and even the good of the one versus the good of the many.

Carpenter is known as one of the Fathers of horror, one of the ones who helped create the “rules” that the film “Scream” loves to flaunt. But long before “Scream” was a thought in someone’s head, Carpenter was already breaking some of the rules he helped to create. There is no Final Girl in this movie that walks (or limps) away at the end, though there were female characters involved. No nudity is shown at all. In fact while sex between a couple is suggested, there are only a handful of kisses shown, nothing more. Not only is the “sin” of sex thrown out (for the most part), none of the characters drink or do drugs. These aren’t high school kids or frat boys. These are Ph.D. students in some pretty challenging subjects (theoretical physics, microbiology, applied physics, and theology are name checked). The rules that Carpenter’s previous movies helped create were out the window here.

As much as this movie does stand up and is still a great watch, there are some elements that wouldn’t work in this day and age. The technological side of the study of the canister in the basement is very dated, especially the computers and monitors. Also, in the beginning, the main character Brian is practically stalking the girl of his dreams, Catherine. He watches her from afar for a long time before he makes his move, and it comes off as less sweet and more creepy as he waits outside the library because he saw her go in, then looks offended when she leaves with a man (nothing indicated this man was any kind of romantic interest for Catherine). Cellphones would also make things easier, as instead of searching the large mostly empty church for Susan (radiologist, glasses) when she disappears, they could just text.
The Verdict

Plot Holes: Since when does the Catholic Church need scientific proof for anything?

Pet Peeve: Susan and the canister. Carbon dating something is not what radiologists do! Also, given the equipment of the day there is no way she could have X-rayed the top of the canister without the canister having been moved for her, which it was not.

Best Scare: Wyndham, in the parking lot, with the bugs.
F/X: Most of this holds up very well. The dummy of Kelly that you could tell was dummy is the only “bad” part really.

Did it Age Well? Yes, it did. Go into it understanding that you are going to see 80’s tech, 80’s cars, and 80’s fashion (which can be nightmarish enough). Because of its atmosphere, play on real phobias, and the fact that it is more intellectual and philosophical than you find in many horror films “Prince of Darkness” definitely stands the test of time.