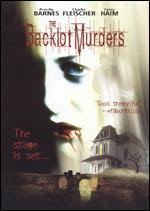 As you will come to discover from reading my reviews, I tend not to always agree with the reviews found on other horror sites (which is one reason I decided to start this site), and this film is a perfect example of that. Trashed by nearly all other reviewers, I actually somewhat enjoyed this film. Sure, it's not particularly original in its execution and has its share of cheesy moments, but it certainly never claims to take itself too seriously and seems to know exactly what it is: a direct-to-video slasher film.
The plot involves a hard-rock group and their crew who are filming a rock video on the back lots of a film studio where many famous horror movie sets exist. Low and behold, a masked killer (in an Elvis, nonetheless) shows up and begins butchering the crew in gruesome ways. This film somewhat works for me on several levels. First, the production value is pretty decent and the sets are refreshing; we even get the "Psycho" house! Secondly, the performances for the most part, are decent for this type of film. Priscilla Barnes steals the movie and should definitely do more work in the genre. The gore level is sufficient and there are some really brutal scenes. The film also has a comedic aspect, that unlike some more popular slasher films, actually help this one a bit. Lastly, the ending is very unconventional and avoids the cliched ending that many of these films employ.

However, I can see where some of the negative feelings towards this film come from. The dialogue, at times, is laughingly bad and there just something not scary about a killer in an Elvis mask. And despite its non-cliched ending, most of the rest of the film is pretty predictable and lacks any intensity or scares. But I have seen worse---much worse---and this film was able to keep me interested. I'd recommend it, but remember, I never claimed it was the next Halloween, just a pretty entertaining direct-to-video flick.
Fright Meter Grade:

Email ThisBlogThis!Share to TwitterShare to FacebookShare to Pinterest
Labels: Backlot Murders, The