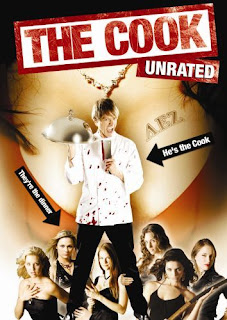 Merging genres in a film is never an easy thing to do. The filmmaker runs the risk of losing his/her intended message or focus. This is never more true when we are taking about the horror and comedy genres. The two are so completely opposite of each other that it is nearly impossible to pull off a horror-comedy effectively. Sure, there are examples of getting it right, but there are certainly more examples of getting it wrong. "The Cook" doesn't get it wrong, so to speak, but would have been a much better, more effective film had he director completely eliminated the comedic elements of the film.

We are introduced to a typical college sorority house. It is break time, and several of the girls decide to stick around the house and have their own little celebration. At the same time, a new cook arrives. Now, this is the first puzzling element of the film; the sorority house is no bigger than a typical two story house. It does not appear to be that fancy of a college campus, judging by the house and its surroundings, so why or how on earth do they have their own personal Hungarian cook??? Ahhh....tuition money well spent, I suppose. Also, where does he stay, since he always seems to be there? Would a sorority house really hire a male chef to stay with the girls alone over a break? Anyway, The Cook ends up being a homicidal maniac and begins to off the sorority sisters one by one and use them in his recipes. Yes, he serves the dead girls to their sorority sisters in various forms, including hamburgers and barbecue.

The Good: The film is at its best when it is working as a horror film. The Cook is a creepy killer and the death scenes pretty brutal and unrelenting. The killings are very reminiscent of the kills we saw in the early "Friday the 13th" sequels and the other more gory entries into the 80's slasher genre, which is probably on purpose, as one scene has two characters talking about a death scene in "Friday the 13th Part 4" as the film intercuts a female victim is being killed in the exact same manner by The Cook. The direction is pretty competent, particularly during the death scenes, and the acting a tad above average. The film did manage to keep my attention and didn't drag in any parts.

The Bad: The film is at its worse when it is working as a comedy. The characters are complete clichés and the screenwriter tries to use this alone to provide comic relief. There is badly written banter between some of the girls and a completely unnecessary subplot involving the resident "badass-lesbian" who seduces the innocent, bible-thumping religious girl. In fact, the screenwriter must have a thing for lesbianism, because there are several unnecessary scenes of girl-on-girl action, as if this a normal thing in sororities. Still, the comedic tones to the film (and they are present) really, at least for me, killed the pacing and effectiveness of the movie. Again, The Cook is such a brutal killer (except when the writer is apparently trying to have him be funny by blabbering and saying stupid stuff in Hungarian) that this could have really been a kick-ass slasher film. Instead, after any brutal kill, there are bad moments of comic relief. The dailogue is clunky, the characters completely uninteresting and underdeveloped. There is no final confrontation between killer and final girl and the ending is too predictable and unsatisfying.

So The Cook becomes another horror-comedy that should have just been strictly horror. Take the comedic element out of this film and you actually have a pretty decent, gory, slasher film. However, as is, the comedic elements diminish the films tone and effectiveness and aren't even all the funny to begin with. Average at best, but had the potential to be much better.

Email ThisBlogThis!Share to TwitterShare to FacebookShare to Pinterest
Labels: Cook, The