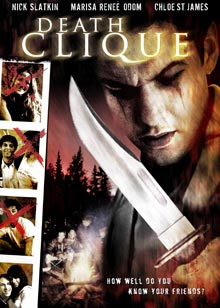 
I didn't expect much from this film at all. In fact, I debated in my local Blockbuster for several minutes whether to even rent it or not. Being a huge slasher flick fan, in the end I felt that it was my duty to check it out! I am very glad I did. By no means does this flick offer anything new to the genre at all, and I expect that most mainstream horror fans will trash it, but I actually enjoyed it. The plot of this flick is pretty clichéd, and again, doesn't offer fans anything new. A group of high school friends decide to spend the weekend at one of their grandmother's house. Grandma recently passed away, so they have the place to themselves and they are ready for a fun filled weekend! However, six months earlier the resident weird kid was put into a juvenile detention center for butchering his entire family. On the way to the secluded house, one of our teens casually mentions that he was released the day before. Needless to say, the group begins to get picked off one by one during an evening of Truth and Dare, which reveals that many of the friends were closer to the weird kid than any of them previously knew.

First, this is a pretty low budget film. Its budget was only $100,000 and it definitely shows. The film has a grainy feel to it (which actually works in its favor in some scenes) and the lighting is horrendous. It's dark when it's supposed to be light and light when it's supposed to be dark in many parts of the film. The dialog is mediocre and at some points just ridiculous and amateurish, particularly in the opening scenes when we are introduced to our group of friends. This is problematic because I fear that many viewers will see the low film quality at the start of the film and then hear the dialog and be turned off immediately, without giving the film a chance. Believe me, it gets better. Also, the pacing of the film could have been improved. There are good attempts to establish our characters with long conversations and interactions, but this slows the film down, particularly when there isn't that high of a body count to begin with. Also, you won't find a lot of gore or blood here. The characters who die pretty much do so in the same way-a hunting knife. More creative deaths could have made the slasher aspect of this film a tad more interesting.. Lastly, though the identity the killer is a pleasant surprise, the showdown between killer and hero/heroine is pretty damned rushed and the lighting is pretty bad, so it makes it hard to see what exactly is happening.

However, since I ended up liking this film, and fear I will probably be in the minority once more reviews start popping up, I will really focus on WHY I liked this flick. First, the acting is actually pretty decent for one of these types of films. Compared to some DTV slasher flicks released around the same time as this one, such as Dark Fields, the acting here actually looks Oscar-worthy! These are REAL teenagers here...not 30 year olds trying to act like teenagers, which we often see in slasher films. Almost all the cast holds their own and you can really buy into them being friends. Also, beside the typical slut and jock, there aren't really any clichéd characters here. The script spends a great deal of time building up these characters and their relationship. Sure, you get the typical cheesy sex scenes thrown in, but for the most part, these are characters that we can care about. The setting of the film is also pretty atmospheric and this is where the graininess and cheap look of the film actually works in its favor, particularly during the outdoor scenes, adding a nice element of suspense. The film really tries to be something more than a brainless slasher flick-characters don't do the typical stupid "let me go check that noise outside by myself" that we often witness. Most importantly, for a film that has such a clichéd plot and a handful of characters, I managed to be surprised and the identity of the killer. I assure you that it isn't as obvious as you may think it is, and while twist surprise killer endings have become a cliché of the modern slasher flick, this one pulls it off quite well without leaving the viewer feeling duped.

Overall, I liked this film, though I am completely prepared to be the minority, but I would definitely recommend this film. Maybe I was just in a good mood when I watched it, but it really had a certain charm and feel to it that I haven't in a direct to video teen slasher in quite some time. Also, definite bonus points for the killer's identity, which is sure to be a surprise (anyone who says they guessed from the beginning is simply lying!!) If you are a horror/slasher fan, give this film a fair chance. You can certainly do a lot worse!