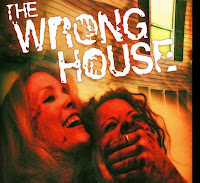 When we announced the 2010 Fright Meter Award nominations back in early January, we have several people ask about Sue Stevens and her nomination for Best Supporting Actress for The Wrong House.  The common theme of these question was "who is she?" and "I have not heard of the film."  It was a glaring inclusion for some, considering she other nominees in the category included performances from big budget, studio films, such as Katie Cassidy.  While Sue's film may be the least seen film of those nominated for Best Supporting Actress for 2010, don't let that fool you; her performance as Sue, a seemingly typical soccer mom who becomes something quite different when her house is robbed and she seeks revenge on those involved, is a wonderful piece of acting.  The film was obviously shot on a shoe-string budget, but Stevens' performance towers as she creates one of the most disturbing and interesting female villains in recent memory.   Yes, it is that good!

We got the wonderful opportunity to interview her about her Fright Meter Award winning performance, the film, and what is next for her.   Enjoy the interview with this extremely talented actress!

﻿
First, congratulations on being named our 2010 Best Supporting Actress winner for you performance in The Wrong House.  For those who may be unfamiliar with you, can you tell us a little about yourself?
The bio of Sue Stevens as an actress is a short one. I play Susan, a very nice woman whose home was broken into, and who is seeking some justice in The Wrong House - a movie written & directed by my husband, Shawn French. Susan/The Wrong House is a first-time acting role for me, one in which I had a lot of fun. Being able to let go and be someone else can be a truly liberating experience. I look forward to doing more of it in the future - hopefully adding to this pitifully short little resume of mine.
As for Sue Stevens in the non-acting world... well, I'm a wife, I'm a mom, I'm a grand-mom. I'm an activist with a few different causes, all wishing to Save the World. I work with airplanes, love to fly, love the ocean, and I follow politics and world happenings a little too closely sometimes. Purple is my favorite color. I'm almost a vegetarian and also am a cat person. Sunrises over sunsets. Long walks on the beach, yes. And, oh yeah, I plan to take jujitsu lessons soon, but am already pretty good at doing an efficient choke out.
All in all, I'm just an average gal.

I read somewhere that the idea for The Wrong House came from an experience that you and your husband, who is also the director of the film, experienced.   Can you shed some light on that?

Oh my, yes... March 18th, 2008 - I came home from work that day to find that our house had just been broken into. And when I say just, I mean just. Shawn had left for work less than an hour before. I was coming home early due to a bad migraine. Walking up to the house, I noticed the front door was left open. "Odd" I thought, but continued heading in. Walking into the bedroom, I notice the dresser drawers open and a bit askew. A few other items in the bedroom, displaced. Again, I thought, "Hmm, that's odd too. I wonder what Shawn was looking for, and why he left the place such a mess."
I called him to ask, and wow, that's definitely an unforgettable moment - the realization (for both of us) that someone had been in the house, most likely with bad intent, and that they could possibly still be there. Not a good feeling at all.
Cops were called. Reports were taken. Nothing else they could/would do. "Most likely high school kids or someone thinking you're a seasonal home. If we hear anything, or your serial numbers turn up, we'll call you. Have a good night. Lock your windows. Good-bye."
That's when Shawn started writing. This all started out as his gift to me.
"There'll be a head on a stick, one way or another."

What was it like being directed by your husband?  Were there any challenges involved in that?

Considering I had a hand in creating Susan (and a lot of the mayhem in the movie), I knew who and what Shawn was looking for with each scene. That, and he's my very best friend - we communicate wonderfully. Working with him was a breeze. I'm kinda looking forward to doing it again...

FrightMeter is obviously a huge fan of your performance.   While most memorable female antagonists in the history of film have been played in a over-the-top (think Piper Laurie, Glenn Close, Kathy Bates, etc..), your performance as Susan is very understated and restrained, which make it all the more effective and disturbing.  Susan really could be the nice, soccer mom next door.   What was your inspiration for your performance and the decisions you made in playing the character?

Ooooo... that is the hardest question to answer!
I remember a moment when we were filming. Shawn had a vision and was trying to capture a certain feel. Take after take, we just weren't getting it. He came over and whispered to me, "Unleash. Go deep. No filters. What would you do if you could? But, remember there's a cake in the oven. Go."
I'm genuinely a nice person, and Susan was a character.  That's all I can say without risking incrimination.
Next question...?

Are you anything like the character Susan that you portray in the film (disregarding the homicidal tendencies....hopefully!)
You mean besides being a nice soccer mom? Well, like Susan, I am not ok with someone coming into my home uninvited and rummaging through my belongings. And like her, I believe in giving people second chances to make good on (most) bad behaviors. And, ya know, I can't really disagree with her philosophy on waterboarding as an effective tool to helping people find the truths they have trapped within. Oh, and like Susan, I can rock the fuzzy slippers and bake a pretty mean cake.
The Wrong House is a pretty brutal film at times.   What the atmosphere like on the set?

Granted, it would get pretty intense during the beatings that were happening, but when that wasn't going on, there was much fun to be had. We had a great group of people here. It was impossible not to have fun.

What is your most memorable experience from the filming?  Any interesting behind-the-scenes stories you can share?
Watching the scene of the break-in, over and over and over again as it was being filmed. That scene brought out so much raw emotion from deep within, having to relive some bastard invading my home, stealing my things. With the first couple of takes, I had tears in my eyes and was just so sick and upset over what I was seeing. It was only a few months since the actual break-in. Still too raw. By the time we were done with that scene though, I was definitely a different person. Pissed off. Empowered. Watching it repeatedly, I realized it was just some little punk that had broken-in. Nothing and no one to be afraid of.
For me at least, it was that scene that set the tone for the rest of the movie.
No more fear.

What is next on your plate?  Any upcoming projects that we can expect to see you in?
You'll have to wait for Shawn to make his official announcements before I can say much more. Just know that it's a project that's been forever in the making (a story Shawn and I have been talking about since we first met) and I get to be a villain, only I don't think I get to be as nice and sweet as the lovely Susan was. Soccer mom no more.

Assuming you are a horror fan, what are some of your favorite horror films?
Of all the movies I've ever seen in my life, The Bunny Game is the single most horrific thing my eyes have ever witnessed. Beautifully done and so very well made, it is brutal and horrible and will burn images into your brain that you'll never be able to remove. It is the creation of my friend Adam Rehmeier and Rodleen Getsic. I'm not sure of this movies actual release date, but if you want horror, definitely watch for it. Be forewarned though, it's the best movie you'll ever see that you'll never ever want to see again, because you'll already be forever traumatized.
Finally, why should horror fans see The Wrong House?

Doing what's right and righting the wrongs. Not messing with people who've done you no harm because you never know what they're capable of. Second Chances. The Wrong House is a strong lesson in personal values and respecting others.
A funny moment happened after we premiered the movie at a local theater. After the lights came on, a boy approached me and began talking, "You don't recognize me, do you? I'm a friend of your son's. I was at your house a few years ago, we (a group of kids) went out at night... we took the neighbor boy's bike... the cops were called to your house about it, do you remember now? Well, I just wanted to tell you again that I'm sorry for that happening. It was stupid, we shouldn't have done it."
A head on a stick, just like Shawn promised me.
And that is why you should see The Wrong House.