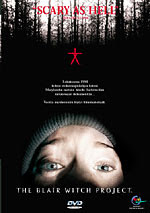 
The Blair Witch Project is perhaps the most divisive horror films of the last twenty years. Horror fans either love it or hate it, and much of the hate that I have encountered always consists of the same complaints. First, some seem upset at the clever marketing ploy that the producers used to promote and solicit interest in this film. They resent the fact that the film was hyped as being "real" footage of doomed filmmakers, something that was never likely in the first place. Seriously, what are the chances of real video footage such as this ever making it into theaters? Secondly, many take issue the camera work and claim that "nothing" happens for most of the film. For me, however, the camera effects add to the effectiveness of the film and was needed to sell the idea that this could be real footage, obviously the result that Myrick and Sanchez wanted to achieve. The film also requires the viewer to play close attention during the parts when "nothing" seems to be happening because there are important factors about the plot revealed during this time, even if it isn't blatantly pushed upon the viewer.

The film is presented through the camera of three student filmmakers who embark on a weekend expedition to the Maryland woods to investigate the legend of the Blair witch, who supposedly haunts and terrorizes the area. After interviewing a few locals to get information on the legend, the three enter the woods. It doesn't take long before eerie and disturbing things begin to happen in the woods around them, all of which they capture on camera. Everything about this film seems real, particularly because of the stellar performances by the three leads and the careful attention paid to building tension and atmosphere. This film is truly terrifying and succeeds so well because it taps into the fears that we nearly all share, particularly those of isolation and uncertainty. There is no super human killer in a hockey mask or a blood thirsty werewolf. It is what the viewer doesn't see that makes this film so terrifying. We know something is in the woods, stalking our three protagonists, but we do not know what. Most of the time we are only allowed to hear what is terrorizing them, and these parts are among the scariest in the film. A baby crying, a woman's scream, a disturbing growl---all things that would be horrifying to hear in the middle of dark woods at night all come into play here. These things all lead to the frenzied climax of the film which occurs inside a ramshackled house in the middle of the woods. This is perhaps the most terrifying five minutes ever filmed, and I distinctly remember being frozen to my seat in the theater. The last scene of the film is truly blood-curling, but only is that effective if the viewer was paying attention during the interviews with the locals in the exposition of the film.

This film is truly nothing short of a horror masterpiece and deserves the success that it has achieved. It has already embedded itself in contemporary pop culture. The clip of Heather Donahue's final tear (and snot) soaked breakdown toward the climax of the film has already been parodied many times and is among the most recognizable scenes in film history. The film is definitely a slow burn though, and despite its critics, it has achieved the notoriety and success that very few horror movies have been able to pull off both before and after its release---and with good reason. It is one hell of a great film!

Email ThisBlogThis!Share to TwitterShare to FacebookShare to Pinterest
Labels: Blair Witch Project, The